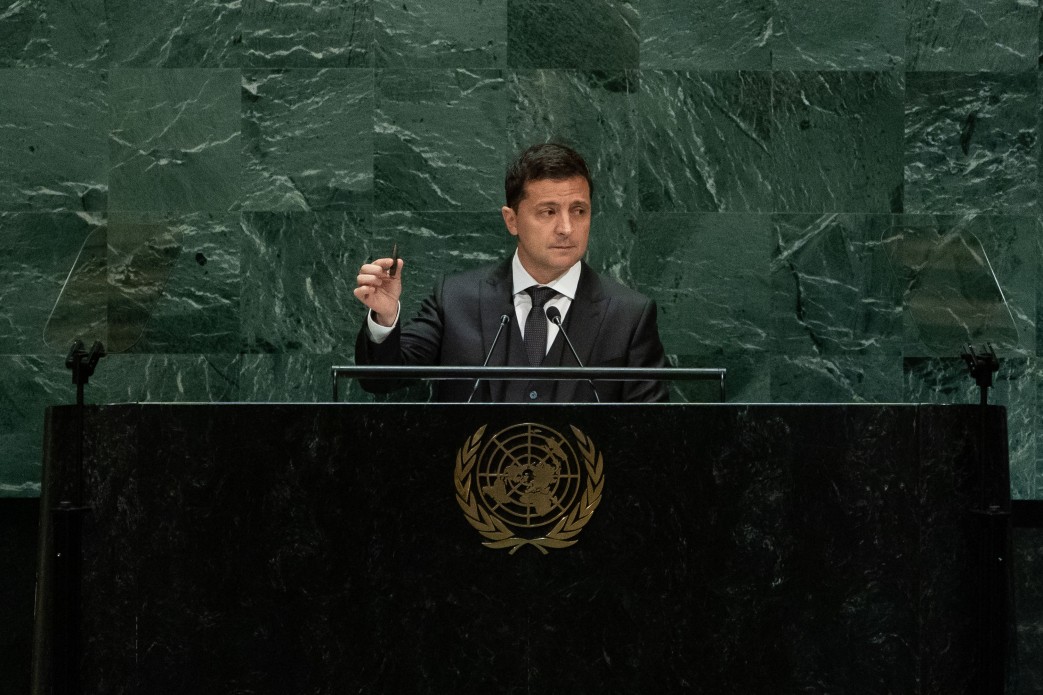 2019 saw a new and inexperienced Ukrainian government navigating its way through a variety of sensitive diplomatic issues, not always with the amount of grace required in the given situation. The biggest foreign policy disaster took place with the leakage of Zelensky’s infamous July 25 phone call with American President Donald Trump. The biggest triumph was to be found in the renewal of the Normandy summit for the first time since 2016, although the results of that meeting are of little worth in the resolution of the conflict in Donbas. 2020 will prove to be a year of challenges, and the variety of Ukraine’s important and delicate foreign relations will prove to be more important than ever.

Ukraine has become a focal point of Donald Trump’s impeachment, complicating the country’s relations with the US.

On December 18, the US House of Representatives passed two articles of impeachment: abuse of power and obstruction of Congress. The first charge was triggered by the July 25 phone call between Ukraine’s President Volodymyr Zelensky and Donald Trump. During the conversation, Trump allegedly pressured Zelensky into investigating the Ukrainian gas company Burisma Holdings and Ukraine’s interference in the US 2016 election. Burisma Holdings, in turn, employed Hunter Biden, the son of Trump’s potential 2020 democratic rival Joseph Biden. While most Republicans dismissed the call as purely casual and appropriate, the Democrats found the exchange highly concerning. Right after the Ukrainian leader expressed his gratitude for all of the USA’s defence support, Donald Trump requested a “favour” – the two investigations. As the House Intelligence Committee concluded, Zelensky’s White House visit was conditioned on these inquiries. It is also worth noting that the Pentagon received its first official instruction to withhold military aid to Ukraine 90 minutes after the call took place. Some of the Congress witnesses have tied the aid freeze to Trump’s request, thus rendering the case even more serious.

The Republicans, however, argue that President Trump was fully entitled to ensure that the aid is not used for corrupt purposes. Moreover, there was no pressure exerted during the conversation. Donald Trump and his allies claim it is the Biden family who is involved in corruption in Ukraine.

To be more specific, in 2014, Biden Jr. became Burisma’s board member. Being responsible for legal and international issues, Hunter Biden received a salary of around $600,000 annually. According to a new note of suspicion – issued to Burisma’s owner Mykola Zlochevsky on November 14 – Burisma has also transferred $3 404 712,82 of “illegally obtained funds” to Rosemont Seneca Bohai LLC, a company co-founded by Biden Jr. As a result, Donald Trump’s personal lawyer, Rudy Giuliani, even traveled to Kyiv to gather evidence defending his client.

The entire “Ukrainegate” scandal, as it was named in American media, has placed Ukraine in a difficult position. The US assistance and support play a crucial role in the country’s security in light of the ongoing Russian aggression. Amounts and level of assistance, in turn, are dependent on a bipartisan agreement. Thus, it is integral for Ukraine to preserve good relations with both Republicans and Democrats – which it has managed so far.

Closer to the end of 2019, the Congress agreed the 2020 defense budget, which provides for $300 billion in military aid for Ukraine. Sanctions against Russian Nord Stream-2 pipeline, crucial for Kyiv’s talks over transit with Gazprom, also came into force.

In 2020, Ukraine will remain at the epicenter of American politics. With the US presidential election scheduled for November – preceded by months of active campaigning and primaries – both parties will speculate on the Ukrainian issue. Even though the Senate – with the Republican majority – is very likely to clear Trump of the House’s charges, Ukraine will be used as a tool for the opponents to further target one another. Donald Trump will continue pushing 2016 Ukrainian interference and Biden-Burisma rhetoric, thus countering the Democrats’ collusion with Russia and the abuse of power accusations. Rudy Giuliani, on the other hand, might pay another visit to Kyiv – or, at the very least, he’ll be in touch with a series of former prosecutors (Lutsenko, Shokin, Kulik) that helped him earlier in 2019. In general, the 2020 election has all the potential to be no less – or even more – loud and bizarre than the one in 2016.

For Ukraine, the worst-case scenario would be betting on a specific US candidate and losing. Not only would Ukraine be accused of meddling in a foreign state’s affairs, but it would also lose a significant part of American support. Interfering in the US internal affairs would also undermine Ukraine’s reputation in the international arena, proving it an unreliable partner. Moreover, with America’s check and balances system, there is no winning side – Ukraine needs bipartisan support.

Therefore, the best strategy Ukraine could employ is remaining neutral and impartial. While there is a series of Ukrainian players willing to cooperate with Giuliani and other American actors, it is important for the official government and Zelensky’s inner circle to stay clear of the US political preferences.

President Zelensky and his team had made it clear that the conflict in the East of Ukraine would remain on the list of priorities, and therefore a renewed effort from the Ukrainian side tried to persuade Russian President Putin to reopen the Ukrainian-Russian discourse. The time was right. Volodymyr Zelensky had made peace in the country a major foreign policy promise and was attempting to unlock the Russian-Ukrainian stalemate of mistrust by different steps. Significant steps have been taken to unlock Russian-Ukrainian stalemate of mistrust in recent months. The two countries exchanged prisoners in September under the “35 for 35” formula. Disengagement of forces has been completed in three points, enabling further talks about withdrawal along the entire contact line. Russia returned the Ukrainian vessels which had been captured during the crisis in the Kerch Strait in November, 2018.

The Normandy summit on the 9th of December was thus a culmination of a long and difficult negotiation process that had been in the works since summer 2019, where Zelensky consistently attempted to get Putin back on board for a renewal of the Format. The meeting of the four leaders – French, German, Russian and Ukrainian – in Paris signaled a continuation of this multilateral format in order to resolve Europe’s most violent conflict since the breakup of Yugoslavia.

The fact that the meeting took place, to begin with, is a victory in itself. Yet the achievements of the first Normandy Summit since 2016 were very limited, adamantly avoiding the points of contention and the very roots of the problems, such as the independent elections in the occupied regions, control over the border and the autonomy of the uncontrolled territories. Russia has been adamantly sticking to the Minsk Agreements which stipulate that Ukraine will only regain control over the territory after local elections have been held. For Zelensky, however, agreeing to this would be political suicide.

And so, even though one can state that the summit has brought the prospect of peace in Ukraine a little bit closer, it must simultaneously be mentioned that this can only be quantified at a one-digit percentage. Russia’s reluctance to participate in the Normandy Summit, shown by Putin’s months-long postponement of the meetings, is something that can’t be overlooked. It’s a testimony to how unenthusiastic Russia is to resolve the conflict, as it has little to no benefits to reap from peace in Ukraine. On the contrary: the longer the conflict, the deeper the schisms in Ukrainian politics, the stronger Russia’s grip on Ukraine will be. Russia would rather use Crimea and Donbas as a leash with which to pull back Ukraine whenever necessary. This leash would lose its strength with the resolve of the conflict.

With the agreement to hold another exchange of prisoners soon, continue with the disengagement of forces, and have another meeting in four months, the parties will now concentrate on issues of elections and amendments in the Ukrainian legislature. The so-called “Law of Special Status” has been extended for another year. It will take significant efforts from both Ukraine and Russia to change the dynamics of the conflict and make peace a reality in the end of 2020. Yet optimism on Russia’s cooperativeness in this regard would most likely only lead to disillusion.

Ukraine’s relations with the European Union have remained quite unfazed, despite the diplomatic blunder Zelensky made in his infamous phone call with US President Trump. However, that doesn’t mean 2019 left the EU-Ukraine relations without turbulence. The European Union awaited the results of a new presidential and parliamentary election in Ukraine with some nervous anticipation, in fear of what a radically new policy might bring. Zelensky’s first challenge was sending out a clear signal to Ukraine’s European allies that the new regime wouldn’t be a totalitarian one, but would steer the same pro-European, pro-democratic, pro-Western values course it always had.

2019 was also the year that several European leaders, the most important of which – Merkel and Macron – voiced their desires to instigate ameliorated ties with Russia. This in turn, unnerved Ukraine, as it was a clear sign that, even though de jure maintenance of sanctions against Russia was to be maintained, it didn’t necessarily mean the same for the de facto situation. It has become increasingly clear that Ukraine has fallen of the EU’s list of priorities. The new government will be responsible for actively putting Ukraine back on the map and pushing for new strategies against Russia. Never before has it been so necessary for Ukraine to pull its weight and be at the forefront of new initiatives for the future.

Catching the EU’s attention is only further complicated by the dragging issue of Brexit, which has entranced the entirety of European political forces. If 2020 will be the year where Brexit will finally take place, a new constellation of political forces will emerge in Europe. This adds to Ukraine’s challenge remain in continuous dialogue and close cooperation with a transnational regime that is already barely able to pay attention to its Eastern neighbour. Europe’s internal struggles and complexities, as well as its further divergence driven by national right-winged political groups rising in power, means that it will difficult to overcome “Ukraine fatigue” and renew Europe’s interest in the Ukrainian-Russian narrative. The limited efficiency of Eastern Partnership is unlikely to change with the start of a new decade and EU membership will remain a thing of the far, far future.

Even though Ukraine’s resolve to continue on the road towards the EU shouldn’t waiver in enthusiasm, it must be stressed that exploring other partnerships will be another important goal for the next decade. The fulfillment of the Association Agreement with the EU will be a long-term project, but in the meantime, it’s worth it for Ukraine to invest more time and diplomatic effort in the strengthening of direct neighbouring states as well as the Baltics. 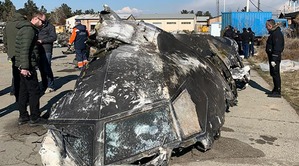